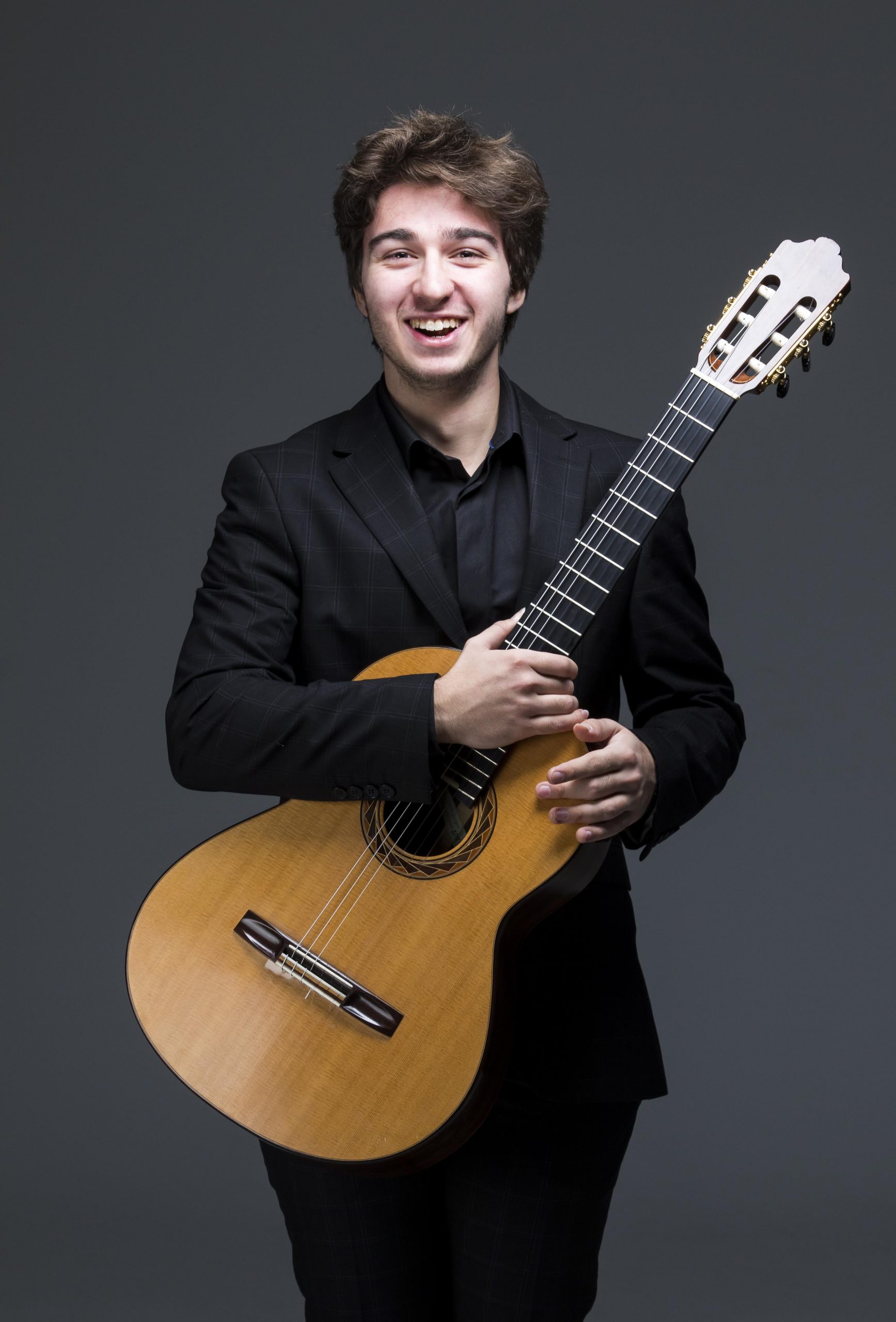 Born in Sofia on 02.12.2000, Georgi Dimitrov – Jojo began his classical guitar studies at the age of 10 and started his studies at the National School of Music “L. Pipkov” (NSM), Sofia at 11, with Stolina Dobreva and Tsvetan Andreev. In 2017/2018 combining school with a preparatory year in the class of Paolo Pegoraro at the University of Music and Performing Arts Graz (KUG), he graduated from the NSM achieving the highest results. Currently, Georgi Dimitrov is a BA student at KUG in the class of Paolo Pegoraro. Besides classical guitar, Georgi is also studying historical instruments with David Bergmüller at KUG.

In 2017 Georgi Dimitrov-Jojo became the first young musician, honored with the Olga Kamburova Award, dedicated to young talents at the Bulgarian National Radio (BNR) Awards “Musician of the Year”. Created by the BNR Allegro Vivace radio show, this award gave Georgi the opportunity to make his studio recordings for the BNR. In 2021, Georgi Dimitrov – Jojo was among the nominees for the Young Musician of the Year Award.

Georgi Dimitrov – Jojo is the First Prize winner of many classical guitar competitions. Among the most recent are the 1st International Classical Guitar Competition GuitArt, Plovdiv, becoming a EuroStrings Artist for 2018/2019; the 13. Anna Amalia Competition, Weimar; the Grand-Prix winner of the Competition, and the esteem statuette “L. Haralambiev”, at the XXI Goleminov IGC; the 9th International Competition for Classical Guitar “Andres Segovia”, Germany; the 1st and 2nd Pleven Guitar Festival, and supplementary concert tour in Bulgaria; the EMCY Special Prize for an exceptional performance, and the First prize at the XII International competition “Young virtuosos”, Sofia, among others. Georgi has recently won the Second Prize at the 2021 Montenegro IGC, winning a handmade guitar made for him by the luthier Slavko Mrdalj.

Georgi Dimitrov – Jojo has entered a series of concerts with prominent conductors and orchestras such as Bernhard Steiner and Camerata musica Budapest, Georgi Patrikov and the Academic Symphony Orchestra of the National Music Academy “Prof. Pancho Vladigerov ”, Svilen Simeonov and The Sofia Synfonietta, Vesselin Baichev and the Orchestra of Lawyers,  Josep Vicent and ADDA Simfònica.

In 2021, Georgi Dimitrov – Jojo performed as a soloist in the concert “Love” with the Pleven Philharmonic under the baton of Maestro Yordan Kamjalov. This event was a joint project of the foundations “Yordan Kamjalov” and “Stoyan Kambarev”, and the Pleven Philharmonic on Vivaldi’s Four Seasons performed on guitar, violin (Lora Markova), cello (Sion Nyman), and marimba (Sara Chakarova). In addition to being a soloist, Georgi also performed basso continuo on a baroque guitar in the concert. The project continued throughout the year in multiple halls in Bulgaria, including the Bulgaria Hall, Sofia.